I recently have been spending a fair amount of time on CodeWars. Many of the katas on the site are based around math problems. My mathematic skills are not great, so in an attempt to make it easier to tackle these problems I have collected the following notes:

Difference between Algebra and Calculus

Read more on the differences between the two fields.

To inverse an exponent you need to use logarithms. For the following exponent (where b > 0) :

We could rewrite it as follows :

Another way to represent the relationship between exponents and logarithms is as follows :

Calculate a PowerOf without using libraries

The relationship between exponential growth and compound interest

Simple formula for calculating averages if you know the total length

Read more about this

For example : Multiplying the average of the first 10 by 10 and then adding the 11th (creating a weighted sum) and then dividing by 11

A pronic number, oblong number, rectangular number or heteromecic number, is a number which is the product of two consecutive integers, that is, n(n + 1).

A Triangular number is the term for a factorial type operation, but with summation instead of products?

Triangle Inequality Theorem, which states that the sum of two side lengths of a triangle is always greater than the third side. If this is true for all three combinations of added side lengths, then you will have a triangle.

What order could 16 pool balls be in?

When repetition is allowed:

When repetition is NOT allowed:

Calculating factorial can be done as follows in JavaScript…

Since an integers overflow on anything bigger than 12!, non-recursive factorials can often be done using look up tables…

Calculating the nth root of a number

Get the nth root of a number using JavaScript

When calculating primes you do not need to traverse every single number. You only need to check up to the sqrt of a number.

If we cut a cube into x number of halves, the total number of small cubes is (no. of halves) to the power of 3.

If we painted the cube a color, and then cut it into smaller cubes, what are the different types of cubes we will have?

Cubes that are not painted

Take the number of cuts, visualize on one plain so that you can see rows and columns - we call this a face.

Cubes that are painted on only one side

Cubes that are painted on only two sides

Cubes that are painted on only three sides

This will be the corners of the original cube, which will always be 8

If we cut a cube into 5 number of halves, the total number of small cubes are as follows: 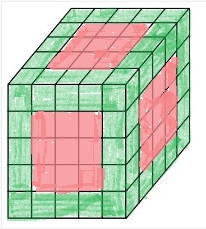 You can apply the same approach to any root, the cubed root can be calculated as follows

Distance / Length of a line

Find the slope using the following:

Find the equation from two points:

Or, another way to format it would be to use the “Slope-Intercept” form: