Possibly one of the best books I’ve read for understanding how to get teams to communicate effectively together. Hands on, easy to understand. This is a must read.

First, it validates. Recording people’s words sends the message, “This is a valuable idea.” And when their ideas are valued, people feel valued. That’s the central benefit of group memory.

Second, having a group memory extends the limits of the human brain. A vast amount of scientific research has shown that most people can retain roughly seven chunks of information in their short-term memory. Once someone’s short-term memory is full, the person simply cannot absorb another idea without forgetting something. (For example, you can probably remember a new friend’s seven-digit phone number by repeating it over and over. But try remembering two new phone numbers at once!)

In a meeting this can pose a real problem. Typically, people hang onto the ideas they care about, and let the rest float in one ear and out the other. The group memory solves this problem. Participants know that if they forget something, they can look at it on the chart. This frees the mind and supports people to keep thinking.

It is important to recognize that the group memory is not merely a tool for keeping the record of a meeting. Primarily it is a vehicle for encouraging full participation. It equalizes and balances. It enlivens the discussion. It helps people work toward understanding and integrating each other’s points of view. In summary, group memory is one of the facilitator’s most fundamental tools for supporting groups to do their best thinking.

** For a detailed discussion on the benefits of using a group memory, see “The Case for a Group Memory” by M. Doyle and D. Straus in How to Make Meetings Work (pp. 38–48). New York: Jove Press, 198

Rough-draft thinking is just like rough-draft writing: it needs encouragement, not evaluation. Many people don’t understand this. If they notice a flaw in someone’s thinking, they point it out. They think they’ve been helpful. But rough-draft ideas need to be clarified, researched, and modified before being subjected to critical evaluation. The timing of critical evaluation can make the difference between the life and death of a new idea.

Premature criticism is often inaccurate. And stifling. When ideas are criticized before they are fully formed, many people feel discouraged and stop trying. Furthermore, they may become unwilling to volunteer their rough-draft thinking at future meetings. They anticipate objections and keep quiet unless they can invent a counterargument. Thus, people learn to practice self-censorship. A group is then deprived of access to its most valuable natural resource: the creative thinking of its members.

Neither approach is right or wrong; they are simply different styles of processing information. But when people with diverse cognitive styles work together to create categories, they’re destined to disagree on such issues as whether workshops is a separate category from go back to school. And since disagreements like these derive from individual cognitive styles, they can’t be resolved by logical reasoning.

The goal of a good discussion is to produce more harmony among individually different perspectives – to reconcile the diversity through a process of mutual understanding.

People who know one another are more likely to overcome their differences and find common ground than people who remain strangers to one another.

This whole chapter is great and worth a read. 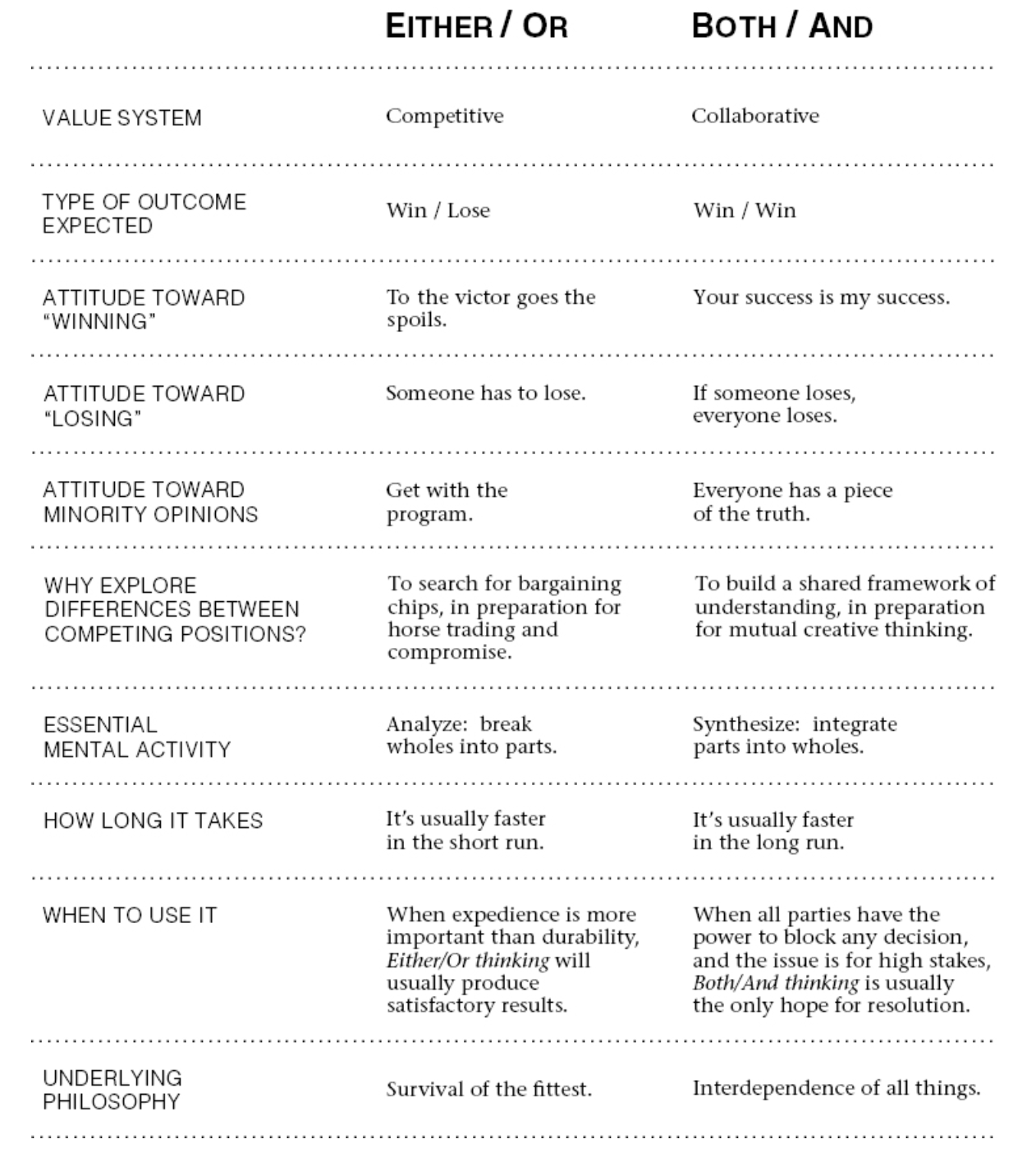 Examples case studies that you can use to stimulate conversations

Facilitating in the divergent zone

Most groups will go along with almost anything a facilitator suggests in the Divergent Zone. For one thing, people generally appreciate the chance to talk. For another, most members are reluctant (at this stage) to challenge the facilitator. However, this compliance can be deceptive. Superficial or pat activities may get everyone talking – but most people will know, when the exercise is done, that they’ve just had a “fast food experience.”

Facilitating in the graon zone

Structured activities are directive, they’re designed to let people follow clear procedures, and they pull for sincerity, earnestness and relationship building. All these characteristics can ground a group whose communication is poor.

Those qualities can calm a troubled group and keep it focused – but getting agreement to do the activity is another matter. In the Groan Zone, when trust is low and tensions run high, everyone’s ideas are easily misinterpreted – and yours will be too. You might be seen as pushing the group into feelings they don’t want to share. Or as manipulating the group in the direction of your own secret biases. Or someone may simply think you’re a control freak.

Facilitating the the convergent zone

Convergent Zone spend much time engaged in structured thinking. The truth is the opposite. Convergent discussions are largely self-managing. For many facilitators, the hardest part of working in the Convergent Zone is learning to pick up the markers, face the flipchart, and otherwise stay out of the group’s way!

Teaching a Group about Group Dynamics